There are two churches belonging to the congregation, one in the centre of Alavus, and the other in Töysä. The Töysä Church, built in 1800, is the oldest public building of the village. The building of Alavus Church was completed in 1914. The prayer room from 1674 and the churches from 1746 and 1825, all of which were built of wood, were destroyed in fires. In Sotavanhuksen museo a visitor can see items that were saved from the burned churches.

The building of the plastered tile church, designed by architect Kauno S. Kallio, was completed in 1914. The church is a nave church with a hip roof. The altar painting, painted by Oskari Paatela, portrays the moment when Jesus Christ was taken down from the cross. The three chandeliers in the middle isle of the church have been saved from the previous church that burned down. The oldest chandelier is from 1828.
The church can fit around 800 people.

The bell tower, designed by Juho Kohlström, was completed in 1826. The bell tower includes three bells, two of which are from the first church in Alavus, built in 1746.

The architecture of the congregation house, designed by the architect Touko Saari, portrays the wings of an angel. The building was inaugurated in 1964. In the vicar’s office one can see a pauper statue, crafter by Kustaa Hallila in 1852, that was saved from the church that was burned down in 1912. The pauper statue is a part of the collections of Sotavanhuksen museo. 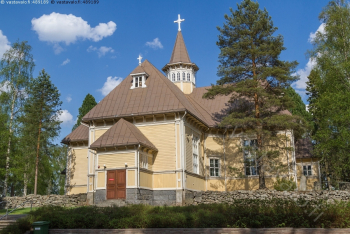 The building of Töysä Church was completed in 1800, and was done according to the plan of the local Yrjänä Lepistö. The wooden church is built in the shape of a cross with slanted inner corners. The church was inaugurated while the building process was still going on, as the tower was completed first in 1824. There are around 700 seats in the church.

The altarpiece, painted by Väinö Hämäläinen in 1908, portrays Jesus and the sinful woman. The chandeliers in the church were purchased with the donations from the members of the congregation between 1841-1874.

The church has been renovated several times. The first renovation, led by the construction foreman Jussi Kurikka, was carried out in 1896. The lining of the internal walls, as well as the decoration of the church, was implemented then. The latest notable renovation was carried out in 1982 according to the plan of the architect Sakari Lähteinen. The painting outside the church, planned by the architect Eckhard Strahlin, was done in 1984.

The bell tower was completed in 1825. The bell tower contains two bells, of which the smaller one is founded in Stockholm in 1800. The larger bell was purchased in Russia in 1829.

The congregation house, designed by the architect Sakari Lähteinen, was completed in 1978. In 1986 the downstairs section was extended with kindergarten spaces, archive, as well as spaces for youth work.